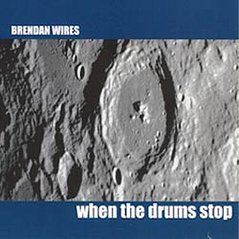 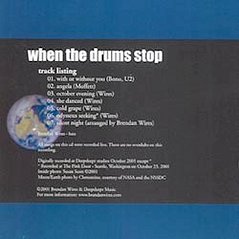 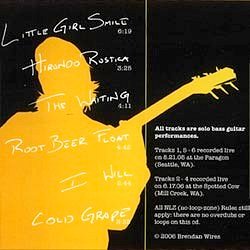 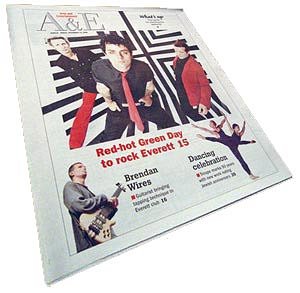 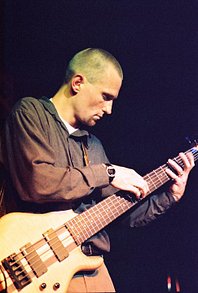 By Sharon Wootton
Special to The Herald

Brendan Wires might have grown up to be a top-flight trumpet player if it hadn't been for braces."I was pretty good," he said of his fifth-grade performances.

But orthodontia ruled out lip instruments. Wires switched to bass guitar and played in jazz bands through high school and college. The Bothell resident has since shifted to a six-string bass and a style of play that sets him apart from most bass players. Wires will share the stage with Smoke Creek tonight during this month's Music at the Flying Pig series in Everett.

About seven years ago, Wires decided he needed to hear more music than his bass could deliver.

"I could hear all these cool guitar parts on a record, but I couldn't play them while playing the bass parts. I wanted to hear it all," Wires said. So he started down the tapping path, playing the guitar parts (melody line) with his right hand up high on the neck.

"You can reach both ends of the neck at one time; play the lowest of low and highest of the high at one moment and everything in between."

While acoustic-guitar tapping goes way back, electrical instruments gave it an easier ride. Turning up the volume allowed more sensitivity to the taps, Wires said.

A six-string bass is tuned much lower so that the pitches are about an octave lower and the depth is much greater.

Additional bass strings present additional problems, but "they also present solutions that you might not have though of. It means a fatter tone from a much thicker and deeper string," he said.

Wires bought his first six-string in 1989, thanks to a bit of inheritance from his grandmother.

"I can get really, really interesting harmonies that come alive in the lower registers. You don't hear it all the time, either."

It's hard enough to make a living in music but it's even harder to take the solo-bass path.

"I really feel that I have something to offer. When I get to present my ideas to listeners, and when they're really turned on ... it's addictive to show those things to new people."

Wires doesn't fit neatly into any musical category except instrumental, although there's an element of improv in most of his songs.

"I want to let the music go where it's going as opposed to letting my hands dictate where it should go."

On his CD, "Brendan Wires: Bass Soloist," he leads off with Van Morrison's "Moondance."

"I didn't even realize I was playing a Van Morrison tune when I started to pick out a real rudimentary walking bass line and a melody over the top."

"Playing that is like going to church for me. It's a heavy song and just the simplicity and the movement of it draws me in every time."

Walking onto a stage is always a risk, even more so for a bass soloist. But Wires likes the challenge, and eventually listeners forget that he's playing a bass.

"It's not so much the instrument. It's the music."

Brendan Wires performs tonight at the Flying Pig in Everett.

When the Drums Stop • CD Review

In June, 2002 Victory Music reviewed my first cd, "When The Drums Stop."

by Leah Hinchcliff - The Victory Review

Here are seven pieces of music, beautifully crafted with stunning technicality and lush harmonies. Deep and sonorous bass notes create a full and gorgeous template over which rich harmonies wrap around soaring melodies.

Hard to imaging this is one man playing one instrument: the electric six string bass. Wires' playing is seamless and seemingly boundless and his virtuoso playing and deep sentiment run through all of the selections of which four of the seven are original. All of the pieces were played live with no overdubs, and they move throughtheme and variations with ease and intricacy.

The first piece is an interesting take on U2's "With or Without You," keeping the melody intact while filling out the original's power chords with blooming major 7ths and single note runs. My favorite cut, "She Danced," is a bouncy arpeggiated figure that runs through the whole piece with a simple but interesting melody in the middle voice.

I should mention that Wires' technique is unique. He plays the bass with both hands, tapping on the fretboard -similar to playing the piano. His technique and his impressionistic soundscapes bring to mind another virtuoso player who used the same technique on guitar, Michael Hedges.

This album is an intimate landscape of delightful impressionistic chords and flights of cascading runs. A beautiful addition to any music collection, this record is perfect for those late night ruminations, and for sitting back and being amazed at one person's talent.

At outdoor festival venues, you expect people to circulate, coming and going during shows as they sample performances on various stages positioned across the grounds. They seek what suits the particular auditory need of the moment.
The sonic flavors at festivals usually run the gamut from rock, pop, blues, folk, and jazz to world beat and some musical hybrids that would seem impossible in other settings. Bands, trios, duos and singer songwriters fill the stages one after the other and a spectator can expect anything but a moment of dead air from the start of the day till the next morning as many performers are lined up to play sets at club venues around town at night. For any performer to capture an audience of this type through the strength on his music alone would be remarkable. When a rock band plays you pretty much have an idea of what that’s going to look like and sound like. Duos and soloist usually have at least one guitar but never has this reviewer walked up to a big stage to see a lone bass player captivating everyone within hearing range. Like zombies, people wandered across the festival grounds when their senses became aware of the unusually intoxicating and rhythmically complete solo bass performance of Brendan Wires. His low notes cut through everything toppling the mish-mash of combined music and like little ghosts, floated through the air haunting every listener with a siren call drawing them into Wires’ bass-centric world. On his 6 string Tobias bass, he stood alone in the middle of a large stage where with both hands he covered rhythm and lead simultaneously. With feet planted firmly, the rest of his body captured the emotion of his music as he stretched towards the bottom of the neck of his instrument to play the far away notes. In an almost writhing contortion of motion, his upper torso moved in semi-circles over his electric instrument. Wires only said a few words about his CDs being for sale and the rest of the time he played and people just stopped what they were doing to absorb every note. The audience maintained a nearly reverent silence. Not a word was uttered until the instantaneous explosion of applause after each song was finished. There was no need for Wires to do anything more than stand there and play.

Brendan Wires is one of the most talented bass soloists I personally have heard. We all know Michael Manring and 6 string electric guitar players who use tap and slapping techniques like Stanley Jordan or Carlos Vamos, but on bass guitar there are less players who demonstrate a high level of a melodic approach in bass music. His earlier CD's where received well by the press and his fans.

Now it's there his newest album, Little Girl Smile, which is an awesome CD with top-notch guitar techniques and also Brendan Wires is a truly an amazing composer. It is hard to believe Brendan plays all his compositions just in one take, nothing is dubbed!

The structure and balance in the songs are well-balanced and that makes his music a joy to listen to. There are 6 tracks on this CD which all will impress a listener.

The songs selected are own pennings like the title track, Little Girl Smile, which has as well an intimate as melancholic setup. Hirundo Rustica is a track with lots of damping the strings techniques and staccato play. The alluring, The Waiting, is pensive and soothing ones mind. Root Bear Float, expresses a lot of groove. I Will, an adaptation from Paul Mc Cartney gets a lot of new elements in a flowing ambiance.

The CD ends with, Cold Grape, a fast piece with a lot of arpeggio play. Brendan Wires has a unique approach to bass playing, one who likes to get all dimensions and possibilities out of his instrument, a true genius in his genre.